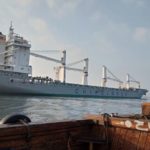 The Indian port of Visakhapatnam suspended berthing of MV Kraszewski, a 20,000-tonne freighter on Wednesday. Port officials said that cargo handling operations would resume only after getting clearances from different governmental departments.

Authorities at Vizag are now in fear due to the previously stored 18,000 tonnes of Ammonium Nitrate, the same chemical responsible for the Beirut blast which consequently flattened half of the Middle-Eastern port city.

What’s more important is that the...

LOGO
Scroll back to top