’Twas the night before Christmas and all though Shenzhen, not a container was stirring; they’d been “rolled” yet again.

This is the holiday “shipageddon” fear for ocean shippers. Amid heavy rolling — delays of loadings until subsequent voyages — can all those flat-screens, Pelotons, laptops, webcams, sneakers and toys make it from China to America in time?

COVAXX’s mission “is to defeat COVID-19 and ultimately democratize health worldwide. Maersk will help fulfill this mission by overseeing all logistics activities to ensure efficient transportation to developing countries,” this week’s announcement said.

“The agreement provides for end-to-end supply chain management, packing and shipping, via air or ocean, ground... COVAXX, a Long Island biotech company developing a multitope synthetic peptide-based vaccine to fight COVID-19, has announced a global logistics partnership with Maersk, one of the world’s largest shipping and integrated logistics providers. The agreement lays out a framework for all transportation...

Maersk has sealed a deal with COVAXX to ship the American pharmaceutical firm’s Covid-19 vaccine around the world when and if it gets approval by regulatory authorities. COVAXX is currently conducting Phase 1 clinical trials of its vaccine in Taiwan and has an agreement with the University of...

Maersk has announced that they have entered a partnership with manufacturer Covaxx for the distribution of its COVID-19 vaccine — which is currently in phase 1 clinical trials — once it is approved by regulatory authorities, reports Supply Chain Dive.

The agreement between the two companies lays out a plan for the end-to-end supply chain management of the vaccine, from packing to shipping to warehousing.

The announcement said the agreement is for distribution in “e...

A Portuguese-flagged cargo ship collided with a Greek navy minesweeper outside the port of Piraeus.

The 4533 TEU Container vessel Maersk Launceston collided with the navy vessel, leaving two crew members injured. They were later transported to a hospital.

According to the coastguard, all 27 navy crew members were rescued from the minesweeper. While the container ship escaped with minor damage, the minesweeper was severely damaged.

After more than 60 days of protests, a railroad blockade in the Mexican state of Chihuahua has ended, according to the Confederation of Industrial Chambers of the United Mexican States (CONCAMIN).

The release of the tracks in Chihuahua took place Sunday, several days after the Mexican government reached a deal to settle its water debts with the United States.

While the rail blockade in Chihuahua is over, an ongoing protest in the central western state of Michoacán is in its 25th consecutive day,... Container shipping giant Maersk has partnered with COVID-19 vaccine developer COVAXX to distribute up to a billion doses of the COVAXX synthetic vaccine worldwide. The logistical agreement lays out a framework for all transportation and supply chain services that will be needed to deliver COVAXX’s... 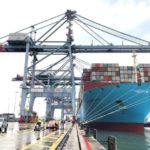 This vessel is deployed on the 2M alliance’s TP6/Pearl service connecting Vietnam with US West Coast and calls CMIT to discharge and load a total of 6,500 TEU cargo. More than 100 important guests including senior government officials attend the vessel maiden...

The goal is to bring a much needed COVID-19 vaccine to emerging and developing nations. The agreement establishes integrated logistics to enable efficient worldwide distribution of COVAXX’s COVID-19 vaccine. The aim is to distribute up to a billion doses of the COVAXX synthetic vaccine worldwide in 2021.

COVAXX, a U.S. company developing a multitope synthetic peptide-based vaccine to fight COVID-19, has announced a global logistics partnership with Maersk, one of the world’s largest shipping and...