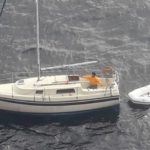 An Australian citizen, suspected to be the main culprit in a sexual assault case, was captured after he was trying to flee from the country hiding in the air conditioning vent of a ship. The accused had stashes of money and a knife with himself.

In a scene that would put 007 movies to shame, this drama unraveled in the real world this past weekend.

A cargo ship en route to Newcastle, New South Wales, came across a yacht which had encountered difficulties in the Yamba waters. According to the...